Speaking and Protesting in America

When discussing the role of protests in America, it seems fitting to begin in the 1960s— one of the most contentious decades in living memory. The decade that began with the protests of the civil rights movement would end in a wave of activism by students, marginalized communities, and women that continued into the mid 1970s. As one historian put it,

"In the 1960s, dissidents shook the very foundation of U.S. civil society." 4

The Fight Against Racism and Injustice

The AAPB holds notable audio and video from the civil rights movement, which reached the peak of its activism in the mid-1960s. Commentary from Rosa Parks, audio from members of the Congress of Racial Equality (CORE) and Student Nonviolent Coordinating Committee (SNCC), interviews with members of Southern Christian Leadership Conference, and radio programs describing stay-outs vividly show the organized resistance to discrimination and the use of protest during the civil rights movement. Another AAPB exhibit, Voices from the Southern Civil Rights Movement, provides an in-depth examination of the movement in the American south.

During the mid-1960s, a new strategy and philosophy to improve black lives grew out of the civil rights movement. The Black Power Movement, espoused by organizations like SNCC and the Black Panther Party, began to advocate and rally in favor of black pride, black liberation, and revolutionary determinism. Pieces like Sproul Hall sit-in documentation (1968), Rally for the Oakland Seven (1968), and Cecil Williams and Angela Davis Speaks (1972) document these protests as well as show their intersection with the rise of the “New Left” and student radicalism.

The Red Power Movement and the Chicano Movement also fought against racism and sought to renew ethnic pride during the turbulent decades of the 1960s and 1970s. The Red Power movement was an inter-tribal movement by Americans Indians that fought for self-determination, sovereignty, and better reservation conditions during the late 1960s and the 1970s. The AAPB contains three pivotal moments of the Red Power movement in its archives: programs covering the occupation of Alcatraz Island in 1969, the Siege of Wounded Knee in 1973, and the Longest Walk in 1978. These three protests highlighted the concerns of American Indians to the public through acts of civil disobedience and mass protest. The Chicano Movement also began in this period, fighting for better labor conditions, against racism, and seeking to celebrate Mexican-American heritage.

The growth of the New Left and student radicalism began in the early 1960s and reached its height during 1968. This new political movement sprouted protests on college campuses from the East Coast to the West Coast on issues including the Vietnam War, free speech, the environment, and racism. Including student groups like Students for a Democratic Society and the Free Speech Movement in Berkeley, the New Left rallied for the “common struggle with the liberation movements of the world.”5

The women’s liberation movement also gained renewed energy and force in the late 1960s and early 1970s as women fought for equal pay, equal treatment, and new opportunities. A vivid piece of this history is found in this recording of a 1973 celebration of International Women’s Day, in speeches by Equal Rights Amendment supporters and in this recording of 1970s rally by women fighting to gain child care support.

During the late 1960s and the 1970s, gay and lesbian activism also flourished in the form of parades and demonstrations as activists and supporters protested the stigmatization of the gay community, demanded equal rights, and celebrated their identities. 1969 would prove especially momentous, as the Stonewall uprising in New York City propelled activists around the United States into action and prompted annual pride parades. Be sure to check out this resource, from the New York Public Library, to learn more: 1969: The Year of Gay Liberation.

Protests against the war in Vietnam loomed large in New Left activities, drawing crowds of students, non-students, radicals, and moderates who agreed that the conflict should end. Protests against the Vietnam War began to gain prominence in 1965 on college campuses and around the United States, eventually garnering national attention in the following two years. Some civil rights leaders, such as Martin Luther King Jr. and James Bevel, also joined the antiwar movement. In an anti-war protest in April of 1967, King and other members of a broad coalition called Spring Mobilization Committee to End the War in Vietnam helped to lead a march of 300,000 anti-war protesters in New York City. Hispanic community leaders, in events like the Chicano Moratorium, and black community leaders also protested that the war had a greater impact in terms of deaths and suffering on their communities. 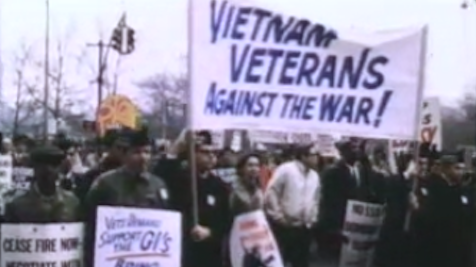 In fall of 1967, over 1,000 student protesters returned their draft cards at the steps of the Justice Department. It was the beginning of over 25,000 draft cards burnt, returned, or destroyed in protest during the course of the war. Recounting in 1982 his role in this act of civil disobedience, Rev. William Sloane Coffin of Yale remarked, “My own feeling was that this war was so wrong that having done all the other things I just felt I would have to commit civil disobedience. Now, it’s not an easy thing to do if you’re married and if you have small children…[But] I felt sort of a wider parish of students were turning in their draft cards. And what was their chaplain going to do? And the obvious thing was that the pastor should stand by his parishioners.”

“I just felt I would have to commit civil disobedience.” 6

By the fall of 1967, only 35 percent of Americans supported U.S. policies in Vietnam.7 And during 1968, the anti-war movement only gained in momentum and fervor. In particular, the Democratic Party felt the effects of anti-war sentiment as the party became increasingly divided over the war. During the 1968 Democratic Convention in Chicago, a stand-off between anti-war protesters and police erupted in violence as police brutally and indiscriminately used force against the crowds gathered to protest.

From 1968 to 1970, protests continued in force as events like the Tet Offensive, My Lai massacre, and the Kent State massacre led individuals to further protest the role of the United States in Vietnam. The last event—in which National Guardsmen shot and killed four Kent State students at an anti-war protest—led to a nationwide student strike that shut down 500 colleges. As one historian put it, “By January 1973, when Nixon announced the effective end of U.S. involvement [in Vietnam], he did so in response to a mandate unequaled in modern times." 8

Next: Protesting in 1980s and Beyond