What's New at the AAPB

Read about about AAPB's new collections, exhibits and projects below.

Curated by Dr. Allison Perlman, the AAPB released a new online exhibit titled "On the Right: NET and Modern Conservatism." Created as part of the National Educational Television (NET) Collection Catalog Project funded by the Council on Library and Information Resources, the exhibit explores the growth of the conservative movement in the mid-20th century through the lens of public television. Rescued from deteriorating videotape and film, 21 National Educational Television (NET) programs produced between 1956 and 1970 explore multiple perspectives on the modern conservative movement. The programs are now available for online viewing, many for the first time since their original broadcast.

Curated by Amanda Reichenbach, the AAPB launched a new exhibit titled "Education Reporting on Public Television." From black-and-white footage of protests against segregated schools in New York City, to full-color newscasts about the rollout of No Child Left Behind in Guam, public television has had a long history of covering education stories. This online exhibit highlights documentaries, news magazines, talk shows, and special reports in the AAPB collection dedicated to learning in America. The exhibit is available at http://americanarchive.org/exhibits/education.

Curated by AAPB Digital Exhibits Intern Kara Zelasko, “Protecting Places: Historic Preservation and Public Broadcasting” uses a diverse range of public radio and television content from 1950 – 2012 to highlight how people have used public broadcasting to advocate, negotiate, or protest historic preservation efforts across America. More than 100 digitized, historic public broadcasting programs, local news reports, radio call-in shows, and interviews document the important relationship historic structures have fostered between people and their neighborhoods. These visual and audio records, digitized and preserved by the AAPB, reveal the ways people have used or rejected preservation in the ever-changing American landscape to share local and national histories, illuminating the ways Americans have envisioned their communities through buildings and sites that connect past to present. “Protecting Places: Historic Preservation and Public Broadcasting” is available online at http://americanarchive.org/exhibits/historic-preservation. 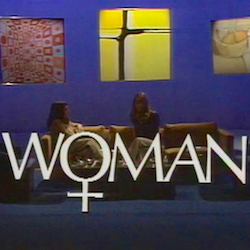 The Woman Series Collection consists of 197 episodes of the Woman series produced by WNED in Buffalo, New York from 1972-1977. Woman was a half-hour public affairs talk show covering issues of interest to women. Guests included well-known and lesser-known activists, journalists, writers, scholars, lawyers, artists, psychologists, doctors and others such as Gloria Steinem, editor and co-founder of Ms. Magazine; Dorothy Pitman Hughes, African American activist and co-founder of Ms. Magazine; Betty Friedan, author of The Feminine Mystique; Florynce Kennedy, founder of the National Feminist Party; Margaret Sloan, co-founder of the National Black Feminist Organization; Karen DeCrow, then president of the National Organization for Women; Margaret Dunkle of the Project on the Status of Women for the Association of American Colleges; and Ruth Miller of the Buffalo Planned Parenthood Association. 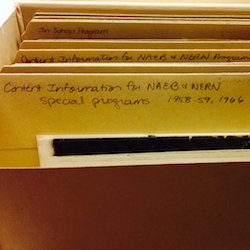 The National Association of Educational Broadcasters (NAEB) Programs Collection consists of more than 5,500 radio programs from the 1950s and 1960s, created by over 100 NAEB member stations from university and public school-run radio stations providing an in-depth look at the engagements and events of American history in the twentieth century.

The American Archive of Public Broadcasting launched FIX IT's sister-site, FIX IT+. Initially developed by the New York Public Library, this transcript-editing platform allows users to choose a specific AAPB recording of interest and edit the transcript from start to finish. Start editing today at fixitplus.americanarchive.org.

Public Radio as a Tool for Cultural Engagement in New York in the 60s and early 70s: Digitizing the Broadcasts of WRVR-FM Public Radio

The Council on Library and Information Resources has awarded a grant to The Riverside Church in the City of New York and the American Archive of Public Broadcasting to digitize, preserve, and make publicly accessible previously unavailable archives of the Peabody Award winning radio station WRVR. The collection includes culturally significant non-commercial programming, including interviews, speeches, and musical interpretations on matters such as civil rights, war, and fine arts, from laypersons to famed scholars, including Martin Luther King, Jr., Malcolm X, and Pete Seeger.

Preservation of WRVR materials will enhance study in many disciplines, including theology/religion, political science, and communications, especially related to American Christianity, homiletics, progressive responses to the Civil Rights movement, contemporary issues of race and sexuality, the cultural impact of the 1960s, and public radio as a tool for cultural engagement and social media precursor.

ROLL THE CREDITS: Classifying and Transcribing Text with Zooniverse

In December 2017, the American Archive of Public Broadcasting launched ROLL THE CREDITS, a new Zooniverse project to engage the public in helping catalog credits for digitized public television programs in the AAPB. Volunteers are helping the AAPB by classifying and transcribing the text from extracted frames of uncataloged public television programs, providing the AAPB with information that can be plugged directly into the catalog for improved search and discovery. Access ROLL THE CREDITS at zooniverse.org/projects/sroosa/roll-the-credits

The AAPB recently acquired three collections of original, full-length interviews from groundbreaking public television documentaries: Ken Burns’ The Civil War, Eyes on the Prize and American Masters. Only excerpts of these interviews were included in previously released, edited programs. Now, the full-length interviews from these landmark series will be available to view online at americanarchive.org or in person at the Library of Congress and at GBH, preserved for future generations to learn about our nation’s history. 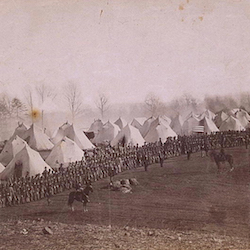 The Civil War, an epic nine-episode series by the award-winning documentary filmmaker Ken Burns and produced in conjunction with WETA, Washington, DC and American Documentaries, Inc., first aired in September 1990 to an audience of 40 million viewers. The film is the recipient of 40 major film and television awards, including two Emmys and two Grammys.

Interviews from Eyes on the Prize 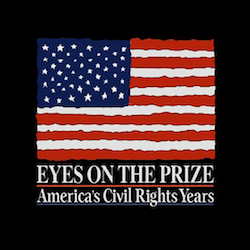 Eyes on the Prize: America's Civil Rights Years 1954–1965 tells the definitive story of the civil rights era from the point of view of the ordinary men and women whose extraordinary actions launched a movement that changed the fabric of American life, and embodied a struggle whose reverberations continue to be felt today. The award-winning documentary series recounts the fight to end decades of discrimination and segregation from the murder of Emmett Till and the Montgomery bus boycott in 1955 and 1956 to the 1965 Voting Rights Campaign in Selma, Alabama. Eyes on the Prize was produced by Blackside, Inc. and aired on PBS in 1987. 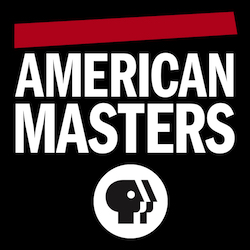 American Masters, produced by New York public television station THIRTEEN/WNET, is an award-winning biography series that celebrates arts and culture. Launched in 1986, the series has set the standard for documentary film profiles.

AAPB has preserved more than 800 full-length interviews filmed by American Masters with artists and leaders such as David Bowie, Yoko Ono, Robert Plant, Tim Burton, Nora Ephron, Denzel Washington, Carol Burnett, Andrew Lloyd Webber, Quincy Jones and Jimmy Carter. The interviews, digitized for In Their Own Words: The American Masters Digital Archive and the American Masters Podcast, will be archived for long-term storage at the Library of Congress to ensure their survival for future generations. Researchers can access the full collection only on location at the Library of Congress and GBH. Information about the American Masters collection is available at americanarchive.org/special_collections/american-masters-interviews.

AAPB has launched a new exhibit titled “Gavel-to-Gavel”: The Watergate Scandal and Public Television. Curated by Library of Congress Junior Fellow Amanda Reichenbach, the exhibit provides, for the first time, complete online access to video coverage of the 51 days of the Senate Watergate hearings and 7 days of the House Impeachment hearings, recorded by the National Public Affairs Center for Television (NPACT) with commentary by Robert MacNeil, Jim Lehrer, and Paul Duke. The exhibit includes essays on the Watergate Scandal, the subsequent Senate Watergate hearings and House Impeachment hearings, a Cast of Characters page to help identify people in the videos, an essay on the significant role that Watergate played in the history of Public Broadcasting, and a page providing information about other resources. Explore the Watergate exhibit at americanarchive.org/exhibits/watergate.

In September 2017, GBH on behalf of the AAPB was awarded a grant by the Institute of Museum and Library Services (IMLS) to fund the Public Broadcasting Preservation Fellowship. The project supports students enrolled in non-specialized graduate programs to pursue digital preservation projects at public broadcasting organizations around the country. The Fellowship is designed to provide graduate students with the opportunity to gain hands-on experiences in the practices of audiovisual preservation; address the need for digitization of at-risk public media materials in underserved areas; and increase audiovisual preservation education capacity in Library and Information Science graduate programs around the country. More information is available at our PBPF project website pbpf.americanarchive.org.